Darkening the Visual Culture of My Very White Parish

Darkening the Visual Culture of My Very White Parish

Racial Reconciliation was the topic of The Gathering of Leaders Philadelphia Gathering in June 2022. As a native of the Northwest, I am more familiar with the incomplete reconciliation with tribal peoples. I did not think that I had much to offer to the group.  I was ready to listen. When colleagues were impressed that I changed the visual culture of my Idaho parish to be brown in my first year as rector, I was surprised. This article is about how I used a method called Episcopal Moment and Etsy to become an accidental disrupter of racism.

Parishioners are often late to service, or it takes a while to log on to digital church. I use the first three to five minutes to quickly explain something in our space or tradition: The Episcopal Moment.  I have taught about the shape of church windows, biographies of biblical figures and how tinsel reminds us to care for refuges. It is not a sermon. It does not relate to the lessons very often.  It feels like something a tour guide would say. The Episcopal Moment is random in content but consistent every Sunday. The first step is to decide how you are going to introduce your parish to the more diverse images in a playful way.

The second step is to pick the images you want to replace and a sequence. Here is a potential sequence and a Pinterest page to see some choices. https://pin.it/3x50qJr

Now you know how you want to introduce new images, you have the images you like, what are some methods to keep the conversation open?

Remind parishioners that they already know that all the people in the Bible are people of color.  Do this often. Remind members that that there are few physical descriptions of Biblical characters.  Every change in visual culture is an experiment or exercise. None of the changes were very expensive, hence Etsy.

These methods are in order difficulty. 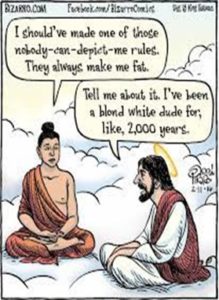