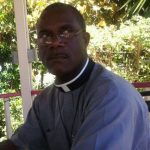 In August, I participated in a program called Gathering of Leaders (GoL) at the retreat center of the Episcopal Diocese of Colorado. The Cathedral Ridge is located less than an hour from Colorado Springs and about two hours from Denver, set atop one of the many hills and mountains in the Rocky Mountain State. The exquisite majesty of those huge boulders as one drives on roads that cut literally through the mountains makes one realize how puny we humans must be from God’s perspective. At 8,000 ft above sea level, the air is a precious commodity and breathing can be a bit laborious for a guy like me who is used to life at sea-level and on flat land for the most part.

Driving to the grounds, one cannot help but “consider, in awesome wonder, all the worlds [thy] hands have made”: the gray clouds and blue skies, the tall pine trees in the dense forests and the mountains. The grandeur of God’s creation is even more impressive and amazing, once you are there.

The brainchild of then Texas Bishop Claude Payne and his friend John Castle, Gathering of Leaders was organized more than 15 years ago by a group of leaders in The Episcopal Church who realized suddenly that the Church was being forced to confront tough questions and issues as the result of the rapid changes in the culture, issues with which they were not — had not been — prepared to wrestle. They did not want to hand the Church over to another group of unprepared leaders. What they conceived was a peer-learning model of small group discussions and reflection to help folks make sense of these rapid cultural changes. Every session of the GoL brings together ordained leaders away from their familiar surroundings, for intense reflections and conversations on contemporary issues, “without contentiousness and partisanship to share their love of Christ and of the Church, to empower each other through mutual encouragement, to deepen their skills as transformational leaders, to establish networks which will aid their ministries, and to clarify their understanding of God’s emerging vision for the renewed Episcopal Church.” Over the course of two to three days at a time, emphasis is placed on the approach to tackling issues rather than on content.

This Gathering (August 12-14) is the second one I’ve attended in two years. Each session usually begins with a small group conversation around the question, “What must each of us leave behind in order to focus on the task at hand”? Often the list of “things to leave behind” comes to mind readily and the actual leaving behind is even easier. This time was different for me. As participant after participant spoke and as I collected my thoughts, my list came to mind easily, but the “[leaving] behind” was not as easy, not by a long shot. How could I leave behind grave health and other issues in my family? Hadn’t we come to the mountains, to the mountain of God’s presence, to seek the face and hopefully the mind, of God?

The Judaeo-Christian tradition posits a theology of the “mountain” as the place of encounter with God. The great lawgiver, Moses met and spoke with God on the Mount Sinai where he received the Ten Commandments. The encounter of Jesus and three of his disciples with three historic figures from the past on the Mount of Transfiguration comes to mind as well. In Holy Scriptures and at other times, people retreat to the mountains to “seek the face of God,” another way of saying they go to bare their hearts to God, to pray and to hear from God. How could I come to the Rocky Mountains, close to the presence of God, so to speak, and leave behind my “stuff”?

Like a rebel, I decided to not leave it behind but bring it to the mountains of Woodland Park. I shared it with my table group and asked for their prayers for my family. While there, I received even graver news! More empathy, more encouragement, more prayer. Where else is better to be than in the mountains of God’s presence, closer, as it were, to God’s ear and heart? When life tends to weigh you down, as it will at one time or another, head for your mountain(s), actual or figurative; don’t leave the weights behind.

Unity and division are the often—but not always—unspoken subtext of[...]

The Micah Paradigm: Building a Culture of Justice and Mercy in Your Church’s Children and Youth Programs

“One night on a mission trip to North Carolina our[...]

I had the privilege to participate at the Gathering of[...]