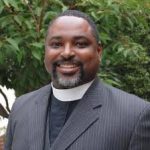 My first invitation to participate in Gathering of Leaders was for the San Francisco Gathering this past April. It would have taken me about 30 minutes to drive there, so it was very convenient, but it would have meant spending my birthday with people I probably didn’t know and talking about a topic that is always uncomfortable regardless of the setting. I delayed my acceptance, and after hearing that the following Gathering would be held at the Barbara Harris Conference Center, just a few months after hearing Bishop Harris speak in person at our diocesan convention, I figured it was a sign from God. I applied to be a part of the group in New England and traveled almost 3,000 miles across the country to engage the same topic as the previous Gathering in a state I’d never stepped foot in. This was definitely a new adventure.

Though jet lagged, I returned home on a major ministerial high, with many takeaways for the continued work of being church. I would like to highlight two: first and foremost is the fact that we dared to have honest conversations about the issue of racial reconciliation as a must, if we are truly going to engage in effective ministry as the body of Christ. It is not hard to recognize that when the topic of race comes up, so do heart palpitations, blood pressures, and emotions. I have found things get even more heated when conversations are among people of differing racial, ethnic, and cultural backgrounds. What I encountered during my time with these colleagues in ministry is that no one shied away from telling their truth and listening to that of the others in the room. It was mentioned time and time again that racial reconciliation requires us all to listen, then listen, and listen some more.

My second highlight was the true incarnation of the concept of the Gathering being a peer led event. I was not at all confident that it would actually happened. Even less so when I was asked to share a reflection, after all I was a first-time attendee. I came home amazed at the facilitators’ ability to get out of the way and allow the event to flow smoothly through the action of the participants, many of whom were as new as me to this event.

I am hungry for more and will be looking forward to future GOL opportunities in particular those that will take me to know new places and people who are willing to delve deeply into conversations and commitments that will strengthen the church’s witness in the world.

“Sometimes preaching the Gospel will bring division, but if it[...]